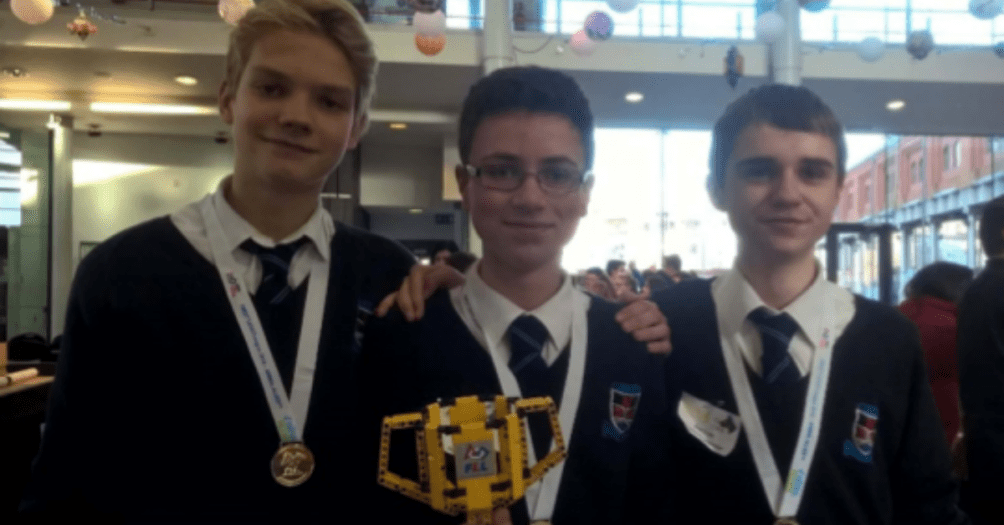 The World Festival is the accumulation of a year’s worth of local, national and international events with teams from over 50 countries around the world competing. The Welsh Technoclub Team Lightning, based at Ysgol Gyfun Emlyn in Newcastle Emlyn, was awarded Best Robot Design at the UK and Ireland competition in Bristol earlier this year and will try to repeat this success when they represent the UK at the International finals in the USA.

Each year, robotics teams undertake a two-part challenge based on a real-world topic. This season, teams explored what might become possible when we work together with our ANIMAL ALLIESSM via a Project and Robot Game, all whilst operating under a signature set of core values emphasizing teamwork and good sportsmanship.

The Project sees teams research and solve real-world problems just like scientists and engineers. The Robot Game sees teams build and program an autonomous robot using a LEGO® MINDSTORMS® kit to solve a set of missions on a playing field. Each mission represents the many ways innovation and technology have enabled humans and animals to exchange learning, friendship, help, daily needs, protection, amusement, and love.

Team Lightning consists of three Year 11 pupils: Edward Upton, Ben Dodd and Joseph Stadius. Each team member has their own key role in the team: Robotics Programming, Robotics Development, and Project Innovation, respectively. We recently sat down with the team to get their insights on their success to-date and to find out about their ambitions for the future.

Did you ever imagine being invited to the Robotics World Festival?

“It all really started with Mrs Ling, who was driving us to the regional competition, who said, `If you don’t go on to win today, I won’t be driving you home!’ From that point onwards, we were particularly focused to win! We went on to win the robot design and project category which was enough to be declared the regional winners!

“We didn’t hold high hopes to win the National event in Bristol, especially after seeing the competition on the day. However, we were overwhelmed to be awarded  `Best Robot Design’ and subsequently given the opportunity to compete at the World Festival!”

Where did the Team name “Team Lightning” come from?

“The team was first established two years ago when preparing for the 2015 Technocamps Annual Robotics Competition which that year was themed “Robo Sports Cup”. Its name was Ben’s idea, and comes from our first robot being called “Zeus” as it required lightning-fast reactions.”

What are your ambitions with regards to the World Festival?

“To be in the top 25% of the teams competing and potentially win the ‘Robot Design’ category! It would also be great to have positive feedback for all of our hard work.”

Ysgol Gyfun Emlyn’s Robotics – and more generally Computer Science – journey started back in 2012 when the Assistant Headteacher, Mrs Sarah Thomas, attended a Technocamps teacher briefing to learn about the Technocamps Robotics Competition. As part of the event, each school was loaned a LEGO® MINDSTORMS®kit (and/or Arduino kit and/or Raspberry Pi kit) with which to establish a Technocamps Robotics club in their school to enter into the Technocamps competition, and as Mrs Thomas says, “From that point we have not looked back!

The Headteacher, Mr Hugh Thomas, notes, “The school is enormously proud of the boys in getting this far in the competition.  They have worked tirelessly on the project since the beginning – building the robot and developing their project idea – and it has evidently paid off.  We know that they will do a good job of representing the school and wish them well in St Louis.”

Arranging the trip to America has not been straightforward, and the team have been working non-stop to secure the more than £5,000 sponsorship needed to fund their trip. A range of local and national organisations have donated towards the fund including: Technocamps, the IET, Cier Cawdor Cars, Phillp Ling Estates, Quinetiq, Cyngor Y Dref and Small Holding Centre.

The World Festival is fast approaching. With the support of a mentor-coach from Technocamps, Team Lightning have set their sights on the big prize: to return to Wales as the World Festival Champions!