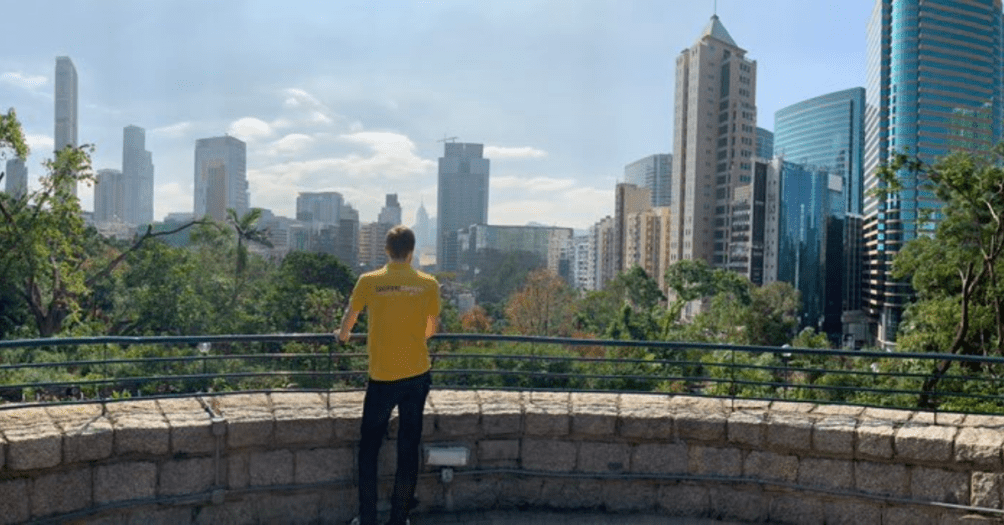 The Technocamps team has recently returned from an incredible overseas adventure, taking the programme global with a trip to Hong Kong alongside our collaborative partners Theatr na nÓg. The SPARK Festival is a brand-new British Council event, which celebrates creativity across the arts, sciences and education.  Technocamps was privileged to be asked to join in the festivities by providing specially designed technical workshops to complement the Asian Premiere of Theatr na nÓg’s award-winning Welsh musical Eye of the Storm.

Technocamps has a long history in delivering workshops in programming, games development, robotics, coding and apps. We already deliver to more than 45,000 young people in Wales, and the programme is set to expand and grow with funding secured from both the European Social Fund and our Welsh Government partners.

Eye of the Storm is a specially-written musical extravaganza which combines exciting drama with a toe-tapping soundtrack written by Award winning songwriter Amy Wadge.   It is set in the Welsh Valleys and tells the story of Emmie, a young carer who invents an artificial tornado to generate renewable energy. The Technocamps team has worked with the show’s producers to develop inspiring workshops that sit alongside performances in schools, enhancing the creative experience and building on the educational themes that form the basis of the narrative.  The workshops challenge children to think outside the box, encouraging an attitude to learning which is underpinned by the notion that

“for artists, scientists and programmers alike, creativity is crucial”.

Stewart Powell, Programme Manager for Technocamps was really motivated by the experience and is looking forward to developing even closer partnerships with both Theatr na nÓg and the British Council :

“Technocamps’ mission is to motivate, inspire and support the next generation of computer scientists so the opportunity to extend this to pupils and educators in Hong Kong as part of our partnership with Theatr na nÓg was superb. As part of the visit, we worked closely with the British Council to explore future opportunities to take our accredited teacher CPD programme to the educators of Hong Kong. Overall, the visit was a great success and we look forward to taking more of our activities out to Hong Kong in the near future.”

Despite some concerns, Technocamps’ Delivery Officer Luke Clement was delighted that the programme made a lasting impact.

“My initial worries about potential differences in the curriculum and understanding of English scientific terminology were quickly forgotten and I was pleasantly surprised by the interest the children had in science and their ability to think creatively. It was a brilliant opportunity to not only highlight the strong links between the scientific and creative worlds, but to raise awareness of Technocamps and the work that we do to engage and inspire school-children with STEM subjects.”

The whole team is excited that the Technocamps brand can now truly claim its place on the global stage.  We are keen to position ourselves as leading educational innovators and to make a significant difference to children across the Principality by supporting the STEM agenda in Wales.