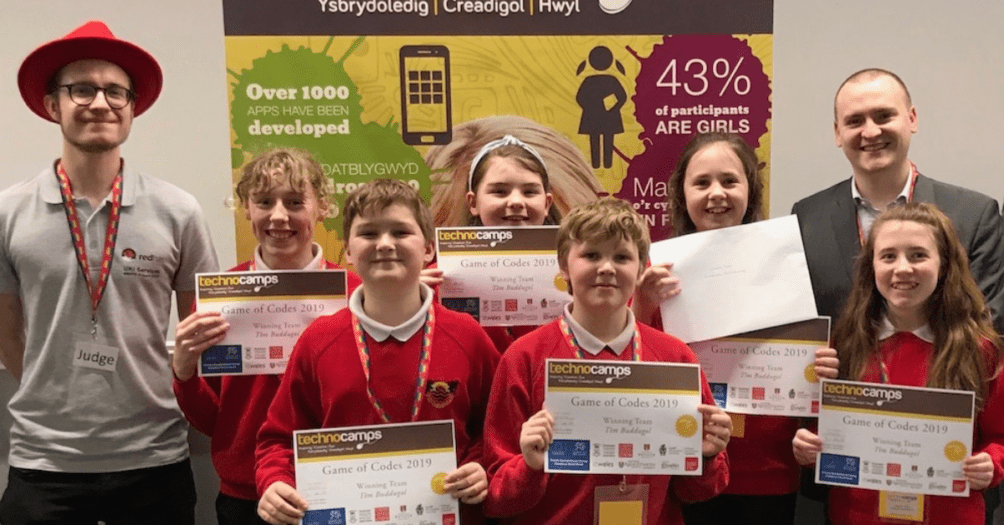 Technocamps recently headed to the capital for the national finals of its annual coding competition, this year hosted by Cardiff University.  Pupils from across Wales were set the challenge to create a piece of software on the theme of Smart Cities. The judges were overwhelmed by the creativity, innovation and technical skills demonstrated by all the teams who entered, and by the exceptionally high standard of the presentations from all those who participated in the final.

Ideas included IRIS from Cardiff High School, which offered a more secure alternative to the smart speaker, and a team whose involvement in the competition has left them so enthusiastic about coding that they have gone back into their primary school to run their own coding club using Technocamps’ resources to deliver training and support for younger pupils.

Programme Manager Julie Walters was pleased to be attending her first event since starting her role with Technocamps.

“It was amazing to see so much enthusiasm in the room and such a diverse range of projects produced by all the pupils involved.”

The overall winner was Pontarddulais Comprehensive from Swansea.  A smart home app allowing users to control lights, blinds and other household features, thus ensuring maximum environmental efficiency, impressed the judges and took the team to first place.  IT teacher Mr Lewis who supported the winning team was absolutely delighted with the result:

“The pupils put so much effort into the project, regularly staying behind for two to three hours after school to develop their concepts. From a teacher’s perspective, it was lovely to see a group of young, enthusiastic friends work together to develop an initial ideal into a fully functioning prototype. They really did push themselves when creating solutions to their problems; something that we try to encourage in everyday life. Since being back in school, the pupils have been speaking about the competition prize of having their heads scanned and printed using a 3D printer.”

“We stayed after school, came in at lunch, and all our hard work paid off. It is an unbelievable feeling to know that the judges appreciated all the effort and time we put into the project. We had so much fun and a great experience in Cardiff.”

Technocamps would like to thank Red Hat and Admiral Insurance for their support, and a special thank you goes to our host, Cardiff University for doing such a fantastic job organising the whole event.

We would also like to offer our congratulations to all the schools who took part and we look forward to welcoming many of our schools back for the Robotics Competition which we will be launching later this year.