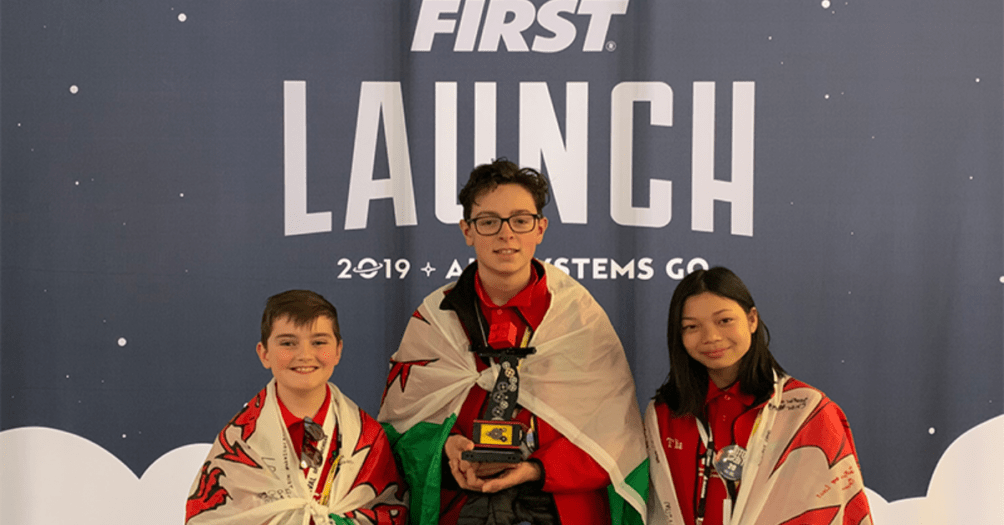 The First Lego League Festival takes place annually and is a huge celebration of all things robotic with fierce but friendly competition between the nations.  This year’s event attracted over 70.000 visitors from across the World and featured over 1300 robots going head-to-head on a range of challenges set by the organisers and marked by an esteemed panel of judges.

The team, Issac, Jac and Thia, all of whom are year 9 pupils from Ysgol Glan Clwyd were coached by their DT teacher Mr. Sion Jones. On being invited to the Word Festival after competing in theNational FLL Finals in Bristol, Jac said:

“We are extremely excited to have been selected to represent Wales in the finals in Detroit. I am looking forward to meeting FLL teams from around the world and sharing our experience with them.”

In the lead up to the competition, the team spent many days during lunchtimes and after school preparing for the event, which, this season, involved preparing innovative solutions to tasks related to space as part of the ‘Into Orbit’ theme.

At the end of the competition, all the teams took part in an award ceremony at the Cobo Centre in Downtown Detroit and Team Egni were excited to be called up onto the stage to receive one of the special awards chosen by the judges themselves. Judges commended the team for their big ideas relating to solving the problem of astronauts traveling through space at zero gravity.

“By replicating earth’s living gravity it solves many problems that astronauts might face. We most definitely thought BIG when thinking of problems to solve! We just hope one day that our idea might become a reality!”

Even though there were only 3 of them in the team, the judges were particularly impressed by the thorough and in-depth research they had undertaken into the problem and by the fact that they weren’t scared of thinking outside the box to come up with a viable solution.

“I am thrilled for the team that they have been awarded such a prestigious accolade and I am sure it will have inspired other teams across Wales. Our journey to the World Festival would not have been possible without those companies and individuals who donated their time and funding to the trip. A special thank you to Technocamps, the IET and the EESW”

“The pan-Wales Technocamps programme is committed to supporting a wide range of extracurricular activities which inspire and motivate students to learn more about computer science and its related STEM subjects.  We are passionate about providing support to Welsh schools to compete on the global stage. I am over the moon to learn of Team Egni’s success and pleased to have been able to support them on their journey.”

This is the third successive year that Technocamps has supported a Welsh school to succeed in the national FIRST competition and represent the UK in the world finals. FIRST has announced its theme for next year’s competition entitled ‘City Shaper’ with the challenges being released in August.

Technocamps will continue to support the ambitious Welsh teams in preparing for the challenge and hope to again have a Welsh representative at the World Festival.