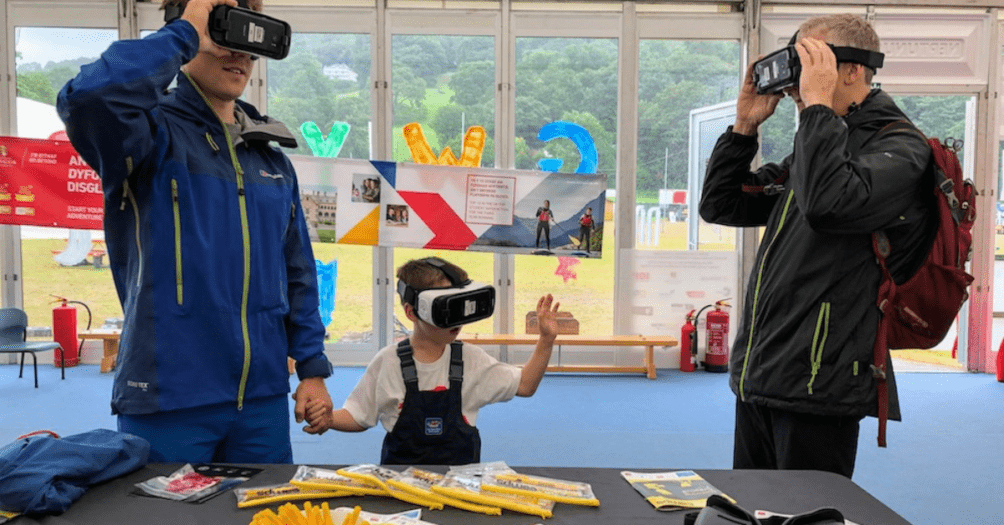 Technocamps were proud to participate in this year’s National Eisteddfod in Llanrwst.

Our stand on the Maes hosted a variety of activities during the week for all ages such as programming the robots, coding and visiting virtual reality. The Technocamps team from Bangor University brought along their VR headsets which were very popular with both children and adults. We were demonstrating the Ocean Rift app, created by Llŷr ap Cenydd, a lecturer from the School of Computer Science at Bangor University.

Bangor University was one of the main sponsors of the Eisteddfod’s Science and Technology Village where our stand was situated. Lecturers and students from the School of Natural Sciences, the College of Human Sciences and the Language Technologies Unit were there throughout the week holding activities for children.

Situated inside the science tent was the DVLA stand, giving visitors the opportunity to build a racing or diving game using Scratch. Their departure on Friday meant that our stand was moved into the science tent, out of the rain.

At the end of the Conwy County National Eisteddfod, Chief Executive, Betsan Moses, spoke of the success of this year’s festival held on the outskirts of Llanrwst.

“The Eisteddfod has evolved and developed since its last visit to Conwy County in 1995 when it was held in Abergele. There are now well over 1,000 individual events and activities, running from early morning until late evening.  Encompassing all elements and genres of culture, this varied programme gave new and unfamiliar visitors a taste of the language and culture, and for those who visit us every year, the programme was as varied and packed as ever, offering something for everyone of all ages throughout the week.”