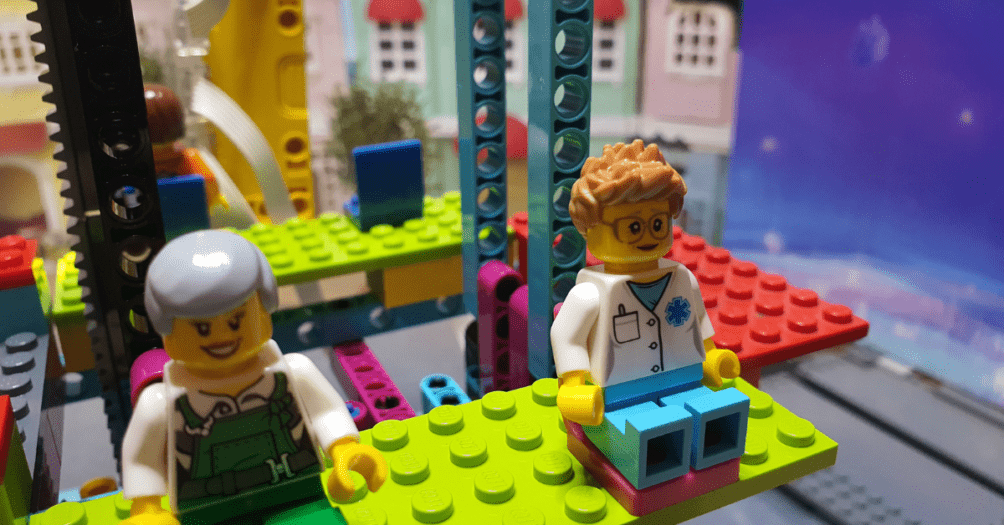 Our Bangor Hub Coordinator, Alex Clewett, had a very productive lockdown. Here, he talks about his experience with the new Lego Education SPIKE Prime set, and how he designed, built and coded his own carnival rides (with his children)…

Back in May, as I was struggling to juggle home-schooling my three daughters and my job as Regional Coordinator for Technocamps at Bangor University, an email landed in my inbox that caught my eye. ‘How would you like to get your hands on a FREE LEGO Education SPIKE Prime Set?’ it read. Sounded like a no brainer so I promptly replied and soon the DPD van pulled up outside with my new set. Seeing this as an opportunity to combine home-school with work, I set about running my very own Technocamps workshop with my girls. After some online training sessions with Neil Taylor from Creative Hut, I felt ready to create some of my own inventions.  I also thought I might let my kids have a go.

Lego SPIKE Prime has the ability to read live weather data from the internet – a first for Lego education programmable products. This led me to the idea of building a ‘Weather House,’ in part inspired by the opening sequence of ‘Trumpton’ (it was great growing up in the 1970s).

Shortly after the trial started, Creative Hut decided to up the stakes somewhat by putting on a competition. The idea was to come up with a build for a fairground ride or game, the winner would receive an expansion kit. My team was up for a challenge so we set about designing, building and coding some of our own carnival creations.  We started off simply with some merry-go-round type rides, but we soon got more adventurous. After a few different iterations, we came up with our design for our ‘Terror Tower’ which went on to win the competition.

I also tried out some of the builds from the excellent resources that Lego Education have put together including prosthetic arms, a combination safe, rainfall meter, and the driving base designed for taking part in First Lego League competitions. These new resources are built around a number of relevant, contextualised themes and are of a very high quality. The latest addition to these resources is a data logging unit based around tracking fitness training – something that young people can relate to and can easily be applied across the curriculum, not just in STEM or Computer Science. I am sure that other, equally engaging resources and applications will emerge as the product develops.

This new product does seem to have a lot of new features designed to make it better for First Lego League such as a built-in gyroscope and a more accessible programming environment based on Scratch. Also, unlike previous products like EV3, the SPIKE Prime application includes the ability to program using Python without any additional configuration. If you are interested in putting a team together for First Lego League and do not already have Lego robotics kits such as EV3, then SPIKE Prime could be a good bit of kit to get started with.

If you are interested in trying out SPIKE Prime in your school, Creative Hut are still offering kits on a trial basis. Email neil@creative-hut.com to find out more or see the details on their website.

Technocamps has long used Lego robotics products with schools and has a great deal of experience in their application. We have made a considerable investment in the new SPIKE Prime kits and we are really excited to start using them in schools with learners – when circumstances allow of course.