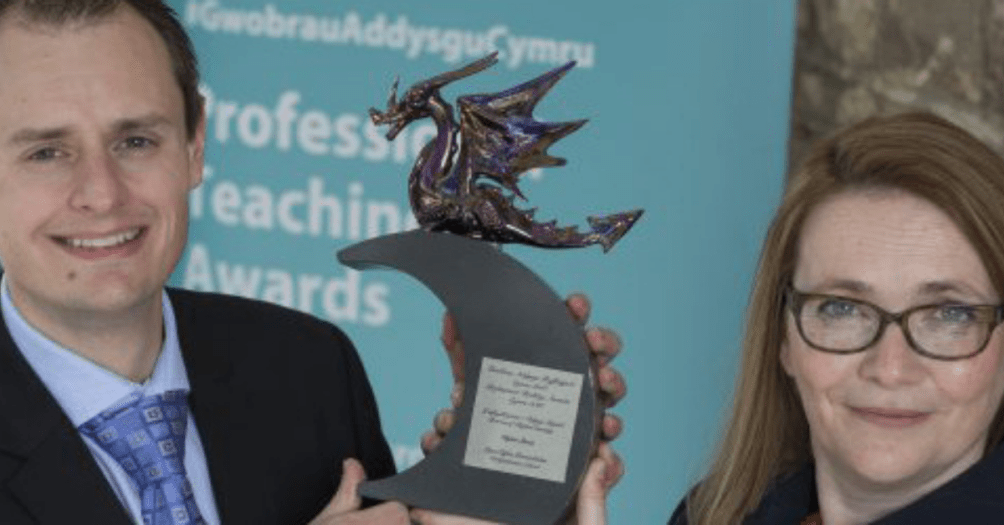 Dylan Lewis, a teacher from Pontarddulais Comprehensive School who is currently attending our Technoteach course has won an award for Best use of Digital Learning, awarded by Professional Teaching Awards Cymru.

Dylan has been attending our Technoteach CPD course for the current academic year at Swansea University and has been developing his skills and practice in the subject of Computer Science. As lead for the Digital Competency Framework (DCF) at his school, Dylan plays an enormous role in supporting members of staff and pupils alike with tech. He takes the lead in introducing new technology such as HWB within the school and has worked tirelessly in ensuring that teachers in all subject areas have the training and support they need in preparation for the upcoming changes in the curriculum. Not only impacting on the staff and pupils, Dylan has played a part in the wider community through the “Educating Elders” project, initiated by himself, which sees pupils working alongside local Senior Citizens and supporting them in accessing the digital world. The judges summed up Dylan’s contribution to the school as “transformational”. In hearing the news, director of Technocamps Prof. Faron Moller said “I am thrilled to hear of Dylan’s receipt of this award. It is great to see the impact our Technoteach course is having on teachers in Wales and we are proud that attendees of our course are leading the sector in promoting the teaching of Computer Science in Wales.”

We asked Dylan a few questions about the award and the part that the Technoteach course had to play:

Why are you attending the Technoteach Course?

I suppose it comes down to learning something new. Over the last few years, there’s been a new focus on STEM subjects with a focus on getting pupils to ‘think big’ and think outside the box. CPD for teachers can be difficult to find, so having TechnoTeach on our doorstep was very handy as it allows schools within the area to access new ideas and resources which might be relevant for years to come. I do genuinely hope that this is something which can continue as it would be nice, in a few years’ time to meet up again over the summer or a half term and refresh and share ideas with new projects being developed. I would love to attend summer schools/projects/ distance learning to further my CPD.

What is the most important thing you have learnt to-date?

The most important thing that I have learnt… two things really. CHANGE is always happening. Gone are the days when a course would run for years and years without modification. As a curriculum pioneer school, we are trailing lots of new and exciting ideas, for example, working collaboratively with other department areas to create a STEM AoLE which will have a heavy focus on Science and Technology based subjects. Our current creative projects have been planned out using the Microbits in the first term and use a range of inbuilt sensors to capture data.

Are you / will you be delivering CS in your school?

As previously mentioned, we are focusing the curriculum on new STEM-based projects, with a variation and a mixture of both CS and ICT as some pupils will naturally be better at one than the other. In schools where they have removed ICT from the curriculum, there has been a significant drop in the quality, presentation and design of work. I truly believe that there is room for both subjects. We will be developing CS throughout KS3 progressing from Logo, to Scratch and onto Python.

What impact has the course / award had on your school and pupils?

Personally, for me, the course has opened my eyes to Python. From my degree, I had a basic knowledge of VB.net and had written a few programs. We have introduced Python, moving away from VB as my pupils seemed to get on with it a bit easier than VB. The first Module on Python was excellent with a number of challenging tasks which really forced ‘computational thinking’. The ‘leap year’ program is mind-blowing!  The use of Lego kits has been a huge bonus too. Since using the kits in Technocamps the school has purchased a set of 10 which are to be used across the curriculum for STEM-based projects. With a heavy focus on the DCF, we have been looking for ways to get more difficult elements of the DCF into curriculum areas, one of these is Algorithms. Whilst working with the Maths department during a challenge project, we created a project centred around ‘Logo’ which allowed pupils to follow instructions and draw shapes. They were also able to modify rules in flow charts to create alternative shapes. This had an added benefit where pupils were exploring higher-level features such as loops to reuse code that they had already written.