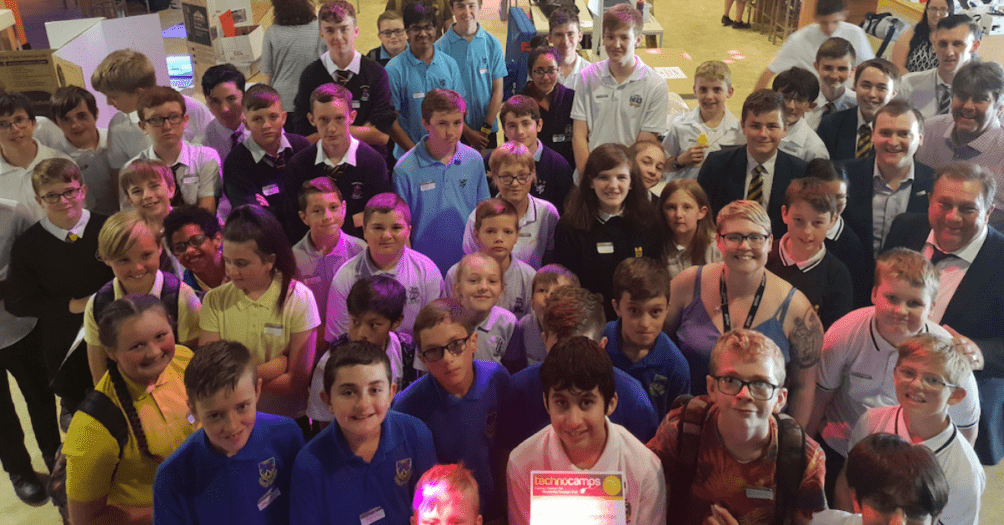 This year’s Technocamps Annual Robotics Competition gave artistic license to pupils across Wales to combine robotics with the creative world! The pupils were asked to put their creative hats on and combine the worlds of the arts with robotics and computer science.

The competition was a huge success with many teams getting the opportunity to show off their hard work, designing, building and programming their performing robots. There was a wide range of robots on display with robots seen dancing, playing music, drawing, and even a 3D printer made of LEGO!

The team who particularly impressed in the live challenge was Ysgol Gyfun Emlyn’s team who managed to adapt their 3D printer into a writing machine which wrote out Technocamps on the A4 paper! Unbelievable!

Once the judges had finished hearing all of the elevator pitches and observed the live challenges they came to a decision which was not an easy one to make. After much deliberation, the team who came out on top was Cardiff High School Team 1 with their robot Alpha Spark. Their xylophone playing robot effortlessly played many familiar tunes and impressed all at the event! Well done Team Alpha Spark who won a LEGO EV3 kit to take back to their school.

Though there has to be a winner, one thing we are incredibly proud of, as always, is that every team had fun, they showed off incredible creativity, and it was evident that this competition has been an inspiration for them. They certainly inspired us! Stewart Powell, Technocamps Programme Coordinator said: “It is always an inspiration to see the amazing talent at our annual Robotics Competition. When setting the theme and challenges I can never anticipate the extraordinary and innovative robots that the teams design and prototype. Well done to all the teams who took part!”

Congratulations to all teams who took part this year, and keep your eyes peeled for our Game of Codes coding competition in the Autumn Term!