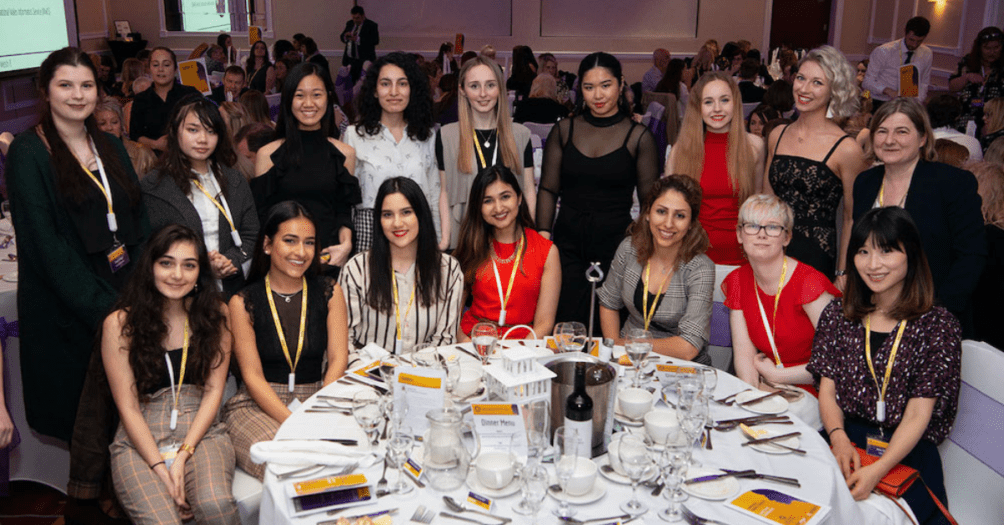 Now in its 19th year, Technocamps was once again pleased to host the ITWales International Women’s DayCelebration, which took place at the Marriott Hotel in Swansea on Friday 8th March 2019.  This year’s event focused on Early Career Development and our speakers offered insight, understanding and inspiration to over 180 assembled guests who had gathered for the Gala Event.

Our regular host for the evening was Mr Kevin Johns MBE, who is probably best known for his radio show on Swansea Sound, as a pantomime dame, and for his involvement with many local charities. He started proceedings with light hearted humour which set the tone for what promised to be a most enlightening and entertaining evening.

Speakers included Julie James, Assembly Member for Swansea West who has been a most enthusiastic supporter of the programme and its aims for a number of years. Technocamps Project Manager Julie Walters gave an update on the aims of the programme in encouraging young people – especially girls – into STEM. Dr Penny Holborn from the University of South Wales shocked and surprised our guests with her statistical analysis of the Digital World. Andrea Meyrick, Head of Education at Techniquest took an unusual approach, conducting a science experiment on stage, bringing mathematical formulas to life and leaving most of the audience going back to their textbooks to check up on how to calculate the volume of a cylinder!

After a sumptuous dinner, Professor Wendy Dearing spoke about the challenges of her career journey and how she had overcome societal expectations in order to reach her academic and professional goals. She also introduced two of her esteemed colleagues from the NHS Wales Informatics Service, who spoke passionately about their own early career stages, and about the obstacles and barriers they had overcome in order to fulfil their vocational aims.

In attendance also was Technocamps’ patron Beti Williams MBE, whose own work to encourage women into technology fields has been recognised with many accolades over the years.  We were particularly pleased to see many of the younger generation of women coming into STEM subjects, with representation from the student population from both Swansea University and from wider afield.

We would like to take the opportunity to thank all our guests for supporting us at this event, and to applaud our speakers for giving up their evening to promote this important agenda and for their incredibly inspirational words. It was an excellent evening which fully embraced the ethos of the International Women’s Day movement and we are extremely proud to continue the legacy of ITWales into its 20th year.

All of the official photographs from the evening are now available on our Flickr account by following the link below.