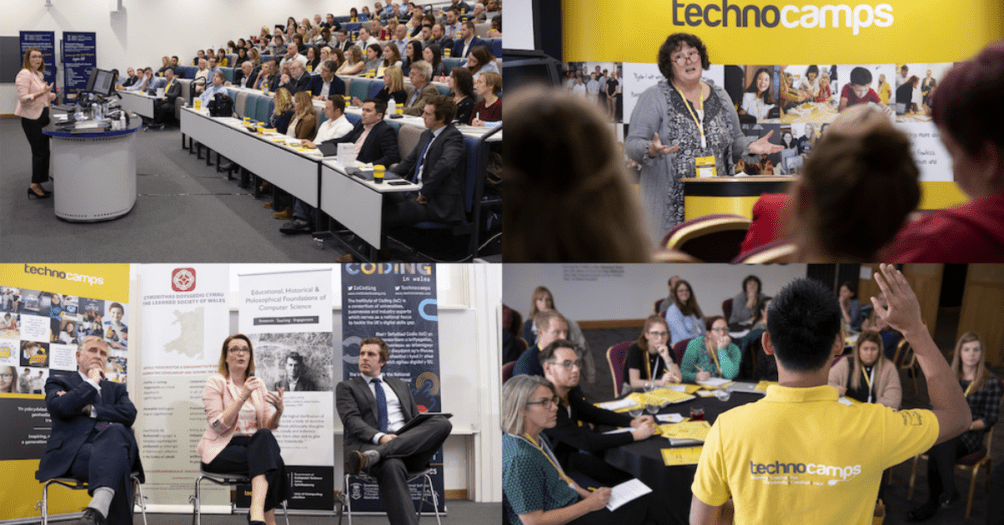 It was an amazing day for educational professionals throughout Wales as Technocamps hosted an unprecedented day of learning, designed to inspire and motivate anyone and everyone who is working within the educational sector – from primary to post-graduate level.

The day began with Stakeholders’ Conferences held simultaneously at both the Liberty Stadium in Swansea, and at Bangor University.

Around 100 teachers and stakeholders signed up to learn more about the impact of the new curriculum and how it would affect them in the classroom.   The team was on hand to explain how Technocamps resources could help deliver aspects of the Science and Technology Areas of Learning Experience within their schools in preparation for the changes that lie ahead.

Technocamps delivery staff showcased some of the workshops available, all of which are provided free for schools in Wales.  As well as providing teaching resources, the sessions offered tips and guidance that can be used to integrate computer science and computational thinking into delivery in the classroom.  The workshops were split between primary and secondary with relevant topics such as machine learning, ethics, autonomous cars, and cryptography on the menu.

Teachers at the event were extremely positive about their experience:

“Resources given were brilliant. Workshop leaders were amazing and pitched difficult subjects in a really engaging way.”

“The workshops were very informative, and the interactive aspect was engaging.”

“A welcome break from the narrow view and an opportunity to encourage us to move towards the new curriculum with vigour rather than dread.”

Guest speaker James Smith from Dev-Ops group emphasised the shortage of skills within the computer science industry and the need to train and upskill young people to meet the needs of the economy in Wales and secure its future as a digital leader.

“It was a real treat to come and see the Technocamps workshops in action and interact with so many great people at a really great event.”

Technocamps was also privileged to follow up the Stakeholders’ Conference by hosting ‘Curriculum for Success?’ on behalf of the Learned Society of Wales at the Computational Foundry on Swansea University’s Bay Campus.

This prestigious event offered educational professionals and other stakeholders the chance to hear directly from the people who have designed the new curriculum and are implementing it in all schools across Wales. This was a rare opportunity for educators to hear about the inspiration behind the changes, directly from the people who designed them.

The Learned Society of Wales really lived up to its mission statement ‘to promote excellence and scholarship, inspire learning and benefit the nation’.  On hand to take questions from audience were Kirsty Williams AM, Minister for Education in Wales; Professor Graham Donaldson whose recommendations inspired the changes; and Professor Tom Crick, who performed a key architectural role in the design of the new Curriculum for Wales.

The evening’s proceedings were streamed live to an audience at Bangor University:  a fantastic example of collaboration between academic institutions, drawing north and south together.  All demonstrated the shared goal of preparing to deal with the new Curriculum for Wales.

Minister for Education, Kirsty Williams AM emphasised the solid work currently undertaken in schools and how the new curriculum would ensure young people were equipped for the future:

“To ask any politician to look towards a successful future is a very brave move…however, I am confident that our ambitious and collective reform programme is delivering now and for a very successful future.”

Professor Donaldson talked about the philosophies underpinning the changes:

“Wales has tried to learn the lesson of how you go about a transformational reform in a way that actually means  that every child, in every classroom, in every part of Wales, is going to benefit from that reform.”

Professor Faron Moller, Fellow of the Learned Society of Wales, Director of Technocamps, and Head of the Institute of Coding in Wales summed up the impact of the day.  He was keen to emphasise the importance of ensuring computational thinking and computer science skills are taught at an early age:

“This is not going to be a curriculum just for talented stars…it’s for every young person in Wales with Computer Science having a clear strand of learning within the Science and Technology AoLE.”

Looking forward to the future, Professor Tom Crick stated that:

“This is the big opportunity for a rethink…We want everyone to recognise that understanding Science and Technology is a key part of being a citizen of Wales.”

Members of the audience were given the opportunity to ask questions in a panel discussion and a lively debate ensued raising many pertinent points about the state of education in Wales.

Professor Alma Harris, Fellow of the Learned Society of Wales, Chair of Swansea University’s School of Education closed proceedings by offering sincerest thanks to the esteemed speakers for taking time out from their busy schedules to participate in such an informative and valuable session.