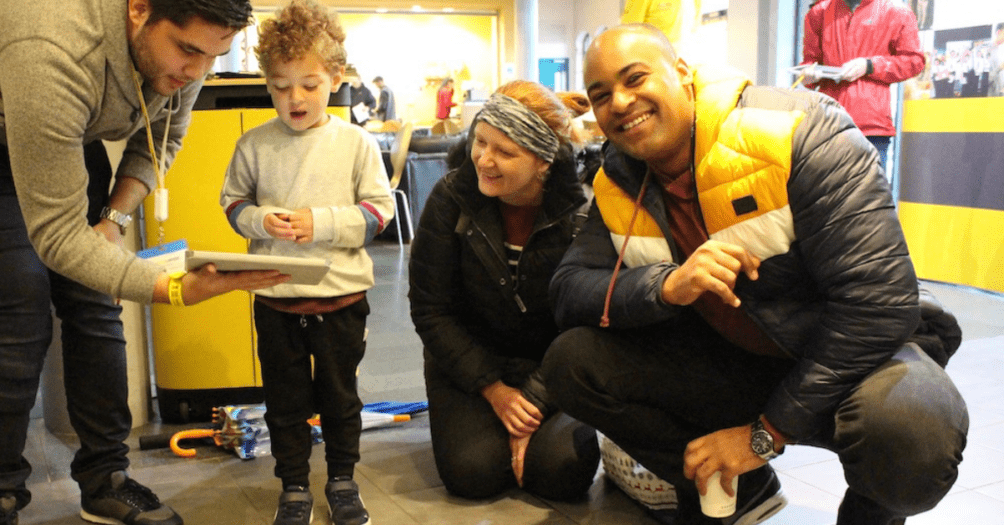 Kicking off the half-term holidays in Wales, the Swansea Science Festival is an annual treat for both children and grown-ups, offering hands-on exhibits, live experiments and techie workshops keeping visitors entertained for the entire weekend.

Organized by Swansea University, Technocamps was once again privileged to have been asked to participate at this exceptional, family-focused event.   It was an opportunity to showcase the work that we do with schools across Wales and to raise awareness of the fact that Computer Science is an exciting sector in which to work.

Parents in attendance applauded the work that we do and admitted that they had been ‘dragged’ to the Technocamps stand by excited children, many of whom had undertaken workshops in their schools.  One parent, in particular, recognized the impact that the project has had on his 10-year-old daughter:

“You came into her school a few weeks ago and she hasn’t stopped talking about robots since.  She’s even asked for her own Sphero for Christmas so she can programme it to do some really cool things.”

This year’s activities were particularly stimulating exciting with visitors working on code-breaking and cryptography tasks.   The team taught our amazing Sphero robots to swim and showed how clever our Lego Mindstorms EV3s are when placed inside a maze. Our Technocamps Delivery team and Ambassadors did an outstanding job keeping hundreds of visitors entertained and informed throughout the course of the weekend.

As well as having a stand at the event, we were also able to offer, for the first time, our full Butterfly Hunter workshops to the general public. These workshops have been delivered in collaboration with Theatre n’a NOg, in schools across the country since the start of the school term.   Technocamps has worked with the theatre company to develop classroom resources using inspiration from their fantastic play about scientist Alfred Russel Wallace (also known as the Welsh Darwin) who came up with his own theories about evolution.

The workshops take the ‘Butterfly Hunter’ theme and move it into the field of Computer Science, teaching the principles of Machine Learning and Artificial Intelligence. An innovative and creative way of combining arts and science subjects in the primary school classroom.

We would like to thank the University for inviting us to participate … see you at the same time, same place, next year!