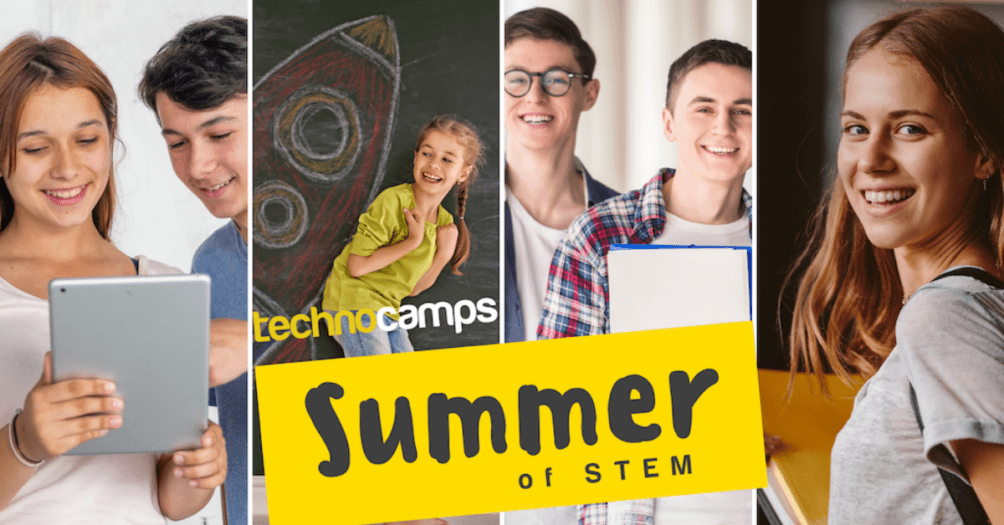 The school holidays have been a bit different this year, with pupils from all parts of Wales enjoying an extended break after months of enforced lockdown learning online. It seems, though, that some pupils can’t get enough of science and technology. We were completely bowled over with the response to our FREE Summer of STEM event which took place over the last three weeks.

Over 500 pupils aged 9-16 signed up to join fifteen days of fun learning. Averaging 100 participants on a Zoom call each day, our Delivery Team were certainly kept busy making sure they answered all questions and dealt with any difficulties.

Using everyday items from around the house and a connected device, pupils were able to learn about the wonders of Wi-Fi, ethical hacking, and how forces work – these topics amongst an endless list of incredible sessions to choose from. They even learnt how to make a ‘proper’ cup of tea and how to build a decent fort to drink it in! You can see some of the best efforts of our experiments and activities by following our social channels.

Huxley (10) and Ostyn (12) really enjoyed the sessions which were a little different from the more formal and structured approach to their learning they were used to during lockdown:

Mum, Nova, was particularly pleased by how much they learnt:

“From my point of view, it’s like stealth-school. If I’d tried to get them to do any of the activities, they would moan “It’s like home school again…”, but you are all so engaging that they are getting straight on with great enthusiasm! The format you are using is brilliant and we are all impressed by how much knowledge you are sharing with us.”

Christie, another parent, found the sessions especially beneficial for her son:

“I just wanted to say that Dylan really enjoyed today’s session; being on the spectrum means it’s very difficult to engage him outside his special interests – we spent most of the afternoon session exchanging Pig Pen ciphers – so today was a big win!”

Each day began with an online session where one member of the Delivery Team presented the day’s topic, followed by Q&A (led by one of the Delivery Team) to ensure that the youngsters were able to understand the topic and could follow the next set of instructions. Pupils were encouraged to share the results of their efforts and discoveries later in the day during the follow-up ‘meet ups’.

During the second and third week, we were also able to include some late afternoon additional Coding Masterclasses for those that wanted to challenge themselves further. These were well received, allowing for further development of new skills acquired during the sessions.

Operations Manager, Stewart Powell, talked about some of the difficulties the Team had to overcome when designing a different kind of learning programme:

“When we started thinking about how we could take our Summer School model and put it online, we really wanted to make it accessible to all. We knew that we would have to make the sessions really engaging to keep the interest and momentum going – after all, this is the school holidays and pupils have been stuck in front of a screen for months! The Team have worked hard to come up with creative and innovative sessions – most importantly, we’ve put the ‘fun’ into learning! It seems that this approach has gone down extremely well!”

Of course, we could not do this alone. We have been supported by the funders of our main programmes, the European Social Fund and Welsh Government. Additionally, we built upon the relationship we already had with the Yellowsands Foundation. Yellowsands supported our ‘physical’ Summer School last year, and this year supported us by marketing the programme far and wide including taking space in national newspapers. They also offered some great prizes for those pupils that managed to crack the ‘Challenge Code’ set by the Team. Without a doubt, the numbers of young people that joined us on ‘Summer of STEM’ would not have been as impressive without Yellowsands Foundation’s continued and much appreciated support.

“We always knew that once the children came, the Team would be able to deliver an amazing programme. However, we’ve all been blown away by the number of children engaging with us and their enthusiasm and creativity!” Julie Walters, Senior Project Manager.

The entire Team has been involved with Summer of STEM and we have been truly humbled by the fantastic feedback we have received from parents and, most importantly, from the pupils themselves. As a bonus, it has also been a great opportunity for brilliant collaborations between Team members from different regional hubs. This means that Summer of STEM has allowed us to develop some fantastic new resources that we can publish bilingually to support schools as they embark on a new academic term and a new ‘Curriculum for Wales’ journey.