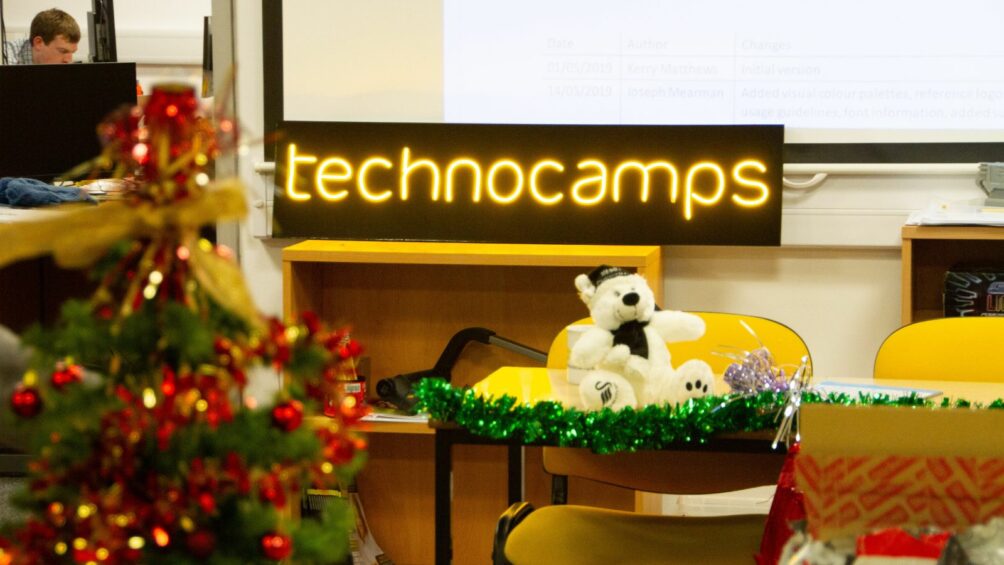 As Technocamps’ European funding comes to an end, we take a look back on our successes from the last 20 years.

2003
Technocamps is established
It is set up as an outreach unit of the Computer Science Department at Swansea University to address the problems of how computing was taught in schools in Wales.

2004
Technocamps Workshops, £25K Microsoft
Microsoft support allowed us to host a week of day-long workshops in the Swansea Grand Theatre for children from secondary schools throughout the region.

2004-2006
ITWales, £1.0M ESF
The first European grant, which allowed our outreach operation to expand into the other universities in Wales. The 2006 EPSRC International Review of ICT noted that our “successful outreach programme has matured to a state that exceeds the informal funding available thus far.” Mike Rodd (BCS Vice President) noted in a Conference speech in 2007: “If only there was an ITWales in England!”.

2011-2014
Technocamps Project, £5.9M ESF, WEFO
This project focused on developing and delivering computer science-based workshops to secondary school pupils in West Wales and the Valleys (Convergence) area of Wales. The aim of these workshops was to inspire, motivate and engage students to aspire to learn more about computer science. This four-year project engaged with 8,700 participants.

2013
Playground Computing (NESTA, 2013-2014)
This project was conceived to address the severe lack of computer science education within primary schools across South Wales. The project delivered workshops – unplugged (without the use of computers), robotics, build your own computer – to encourage pupils’ interest in computer science. It engaged with over 6,000 pupils.

2013-2015
Technoteach (National Science Academy (NSA))
As the curriculum refocused towards computer science, this left a large opening in both teachers’ confidence and competence to deliver computer science in school. The NSA provided funding to support teacher CPD by providing ad-hoc session to teachers across Wales.

2014-2016
Learning in Digital Wales CPD Programme (WG)
This 24-month programme was funded to support the delivery of the computer science curriculum across Wales by providing a minimum of one 3-hour taster session to all maintained secondary schools across Wales. These hands-on workshops were developed to inspire more students to elect to study computer science at GCSE, as well as support teachers in delivering the current computer science curriculum. In total, this project engaged with 11,145 pupils and 453 teachers through the delivery of over 400 workshops. On average, pupils received over 9 hours of engagement with the project.

2016
Technoteach accredited programme
The accredited level 3 programme provided a training qualification for teachers at QCF Level 3 leading to a Certiﬁcate in the Teaching of Computing. The programme of study was undertaken over 18 days, taking 120 hours to complete. The four modules delivered included Programming for Teachers, Teaching Programming, Data Representation and Robotics. This programme continues to be delivered to-date, with over 110 teachers completing the qualifications.

2018 – 2021
Technocamps ESF Operation, £5.3M
Limited to the convergence area of Wales, this project is aimed at secondary school pupils aged 11-16. It aims to engage with 3,800 participants, offer 140 workshop programmes and focus on STEM Enrichment. It uniquely aims to engage with participants that are female. Additionally, the programme supports competitions, International Women’s Day and provides an annual stakeholder conference.

2018
Technoteach, Playground Computing, Technoclubs, STEM Enrichment
WG supported Technocamps alongside the ESF-funded operation to ensure that non-Convergence areas of Wales could also be supported with STEM Enrichment programmes and to provide the continued support to teacher training, primary schools and the community.