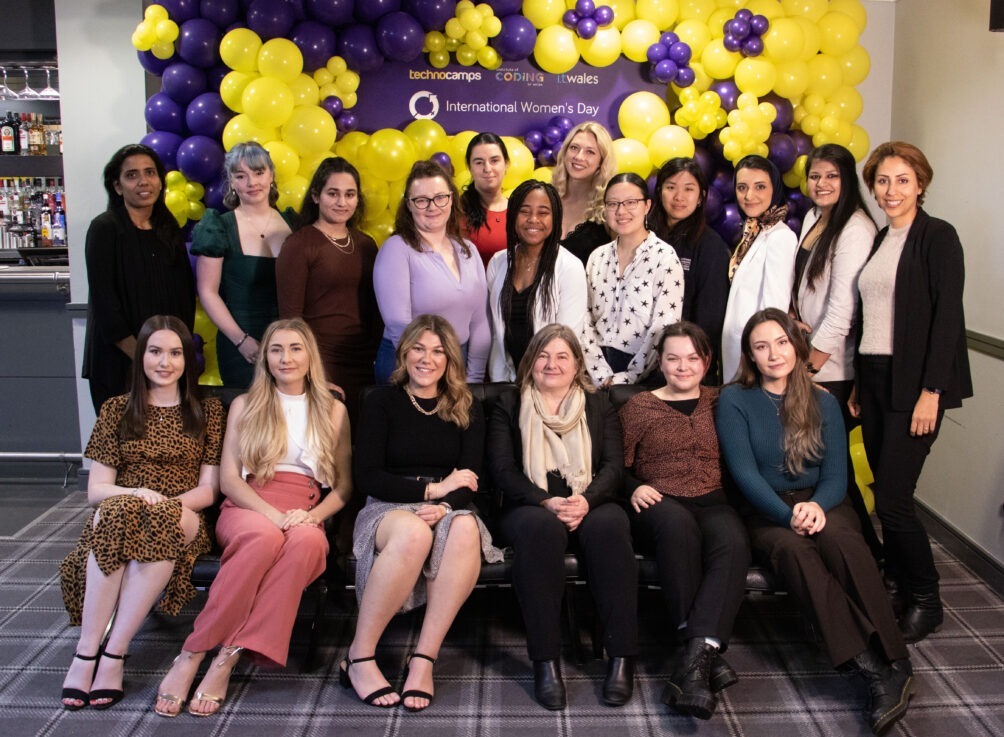 Join us as we celebrate Women in STEM and 20 years of Technocamps on Wednesday 8th March.

The annual ITWales International Women’s Day Celebration provides an insight into the diverse range of business and career opportunities for women in the 21st Century. It offers a platform for sharing experiences, knowledge, and best practice for women, particularly those working within science and technology.

The event will showcase the work being done by business, charities and projects across the country to encourage girls to study and work in the STEM industries. We welcome all women and allies!

International Women’s Day is a global day celebrating the economic, political and social achievements of women past, present and future. Annually, thousands of events are held throughout the world to inspire women and celebrate achievements. A global web of rich and diverse local activity connects women from all around the world including political rallies, business conferences, government activities and networking events. We hope you are able to join us for an evening that promises to entertain, motivate and inspire.

Kev Johns MBE is one of Wales’ busiest comperes and stage performers working right across the UK. In theatre, Kevin played Will Hay in The Theatre Company’s production of the musical Amazing Grace. He has appeared in several productions for Fluellen Theatre Company and for the National Theatre of Wales show “The Passion” directed by Michael Sheen as the MC of The Last Supper and in the film version, The Gospel of Us. He is considered to be one of the world of Pantomime’s Top Dames, with a Panto career spanning over 20 years.

Kevin received his MBE for services to charity in Wales and has many other awards and accolades to his name including: the Ambassador for Swansea Award from the South Wales Evening Post; the Lifetime Achievement Award from the Swansea City Supporters Trust; an Honorary Fellowship awarded by The University of Wales Trinity St David; a Special Recognition Award at The Swansea Bay Volunteers Awards; and a Special Recognition Award given at The Wave and Swansea Sound Local Hero Awards. He won the ‘Swansea Icon’ vote for the city’s 50th Anniversary and has been given Honorary Freedom of the City of Swansea.

Sabrina Lee is a BBC Wales weather presenter. She grew up in the south Wales valleys and at school was quite shy. During her teenage years, she loved Geography classes. When she discovered that she could study the weather at University, she jumped at the opportunity as it sounded right up her street! She then went on to study Meteorology and Climate at the University of Reading and the University of Oklahoma, where she got her first tornado. Four years later, she graduated and moved to London to become a weather forecaster and where her jobs included forecasting for the media, utility companies and councils.

Her dream job was to become a weather presenter, and in 2019 BBC Wales offered her the opportunity to join the team. She usually works on 4 television and eleven radio bulletins each day. Her alarm often goes off around 3:50am, with a 5am start time, but she really enjoys her work and is grateful to work with some amazing people. Interestingly, Sabrina doesn’t use a script for television and she can see herself in the camera which is how she knows where to point. Her job has led to interesting experiences, including meeting King Charles, presenting the weather for the whole of the UK, speaking at events and making climate change content.

Away from the camera and microphone, Sabrina enjoys spending time with loved ones, travelling, cooking and adventures outdoors. She has been a STEM ambassador for many years, hosting and visiting schools. She hopes to help inspire the next generation of female scientists.

Most kids ride around in their toy cars, but not Dr Jen Millard. At the age of 2, an inquisitive mind saw not a quicker way to get from A to B, but something to tinker with – well, as much as a toy toolbox would allow. Eternally curious, Dr Jenifer Millard fell in love with the night sky after gazing at the Moon through an ageing telescope. She had to know everything about the stuff “up there.”

Jeni completed her Astrophysics PhD in 2021, wherein she studied “The Stuff Between the Stars” at Cardiff University. Although those moments of discovery, to be the first person in the world to know something about the Universe that we didn’t know before, were undeniably thrilling, during her PhD, Jeni realised that her true passion lies in sharing her love of space with the world. She is now the Managing Editor of Fifth Star Labs “Sky Guide” App, writer and host of the “Awesome Astronomy” podcast, BBC space expert, science presenter for BBC1 Wales’ “Weatherman Walking”, and public speaker. A keen practical astronomer too, Jeni co-organises Astrocamp, a bi-annual star party where amateur astronomers gather under the Brecon Beacons skies to observe the cosmos and enjoy talks, quizzes, and activities. She was also recently made Honorary President of Barry Astronomical Society, and is one of Cardiff University’s 30ish Award Winners for 2022, recognising the movers and shakers in the alumni community. When not getting giddy about space, you’ll find Jeni watching a movie, galavanting around the UK, or being bossed around by her pet cat.

Casey Hopkins’s route into STEM was an unusual one. She was set to be a French teacher until the course she’d wanted to study got cancelled due to lack of interest. Casey decided instead to study Computer Science, on the assumption it would involve graphics.

After discovering graphics were not a part of the course, Casey came across Technocamps and wanted to get involved, so she selected a teaching module that was run by Technocamps Director Prof Faron Moller. This allowed her to teach Computer Science in local schools. After graduating, Casey worked as a Teaching Fellow at Technocamps, which involved teaching school pupils how to make robots and how to write programs for their GCSEs, as well as teaching Swansea University students modules on their Software Engineering degrees.

Register free
We use cookies on our website to give you the most relevant experience by remembering your preferences and repeat visits. By clicking “Accept”, you consent to the use of ALL the cookies.
Cookie settingsACCEPT
Manage consent