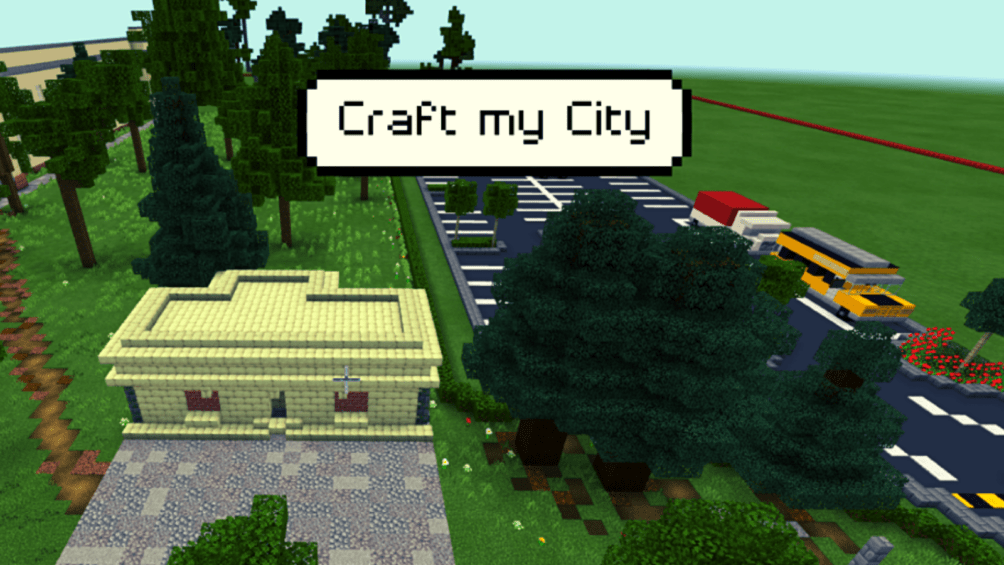 Minecraft captures an element of artistic freedom that many other mediums haven’t yet matched. The ability to model a 3-dimensional world with simple tools enables visions and ideas to take form with ease. During my youth, I spent many hours with my peers building elegant constructions and venturing off into the diverse biomes to explore. To put it simply, if you could imagine it, you could find a way to build it. So, when the opportunity arose to work with Minecraft in a professional capacity, it was only natural that I instantly jumped at it.

Cardiff Council’s future sustainable plans involve transforming parts of Cardiff to offer more to the general public, bringing more life to parts of the city and attracting more people to the outdoors whilst meeting standards set down for outdoor spaces.

As, part of its Child Friendly City Initiative which places the rights of children at the heart of all decision making, Cardiff Council wanted to give young people the chance to present their ideas and encourage them to think about green spaces and the environment. The competition, Craft My City, outlines a small area behind the Museum in between the University buildings, and the task of building the location was given to Technocamps’ Cardiff Hub.

Having voiced my interest in the project and with a good history of crafting, I was assigned a small group of highly skilled Minecraft builders to complete the project. The team consisted of four Cardiff University student ambassadors, a fellow delivery officer and myself. Whilst the project itself was an innovative stride, the scale of the project was smaller, to test how students would engage with it. The project was my first experience of project management, but more importantly, it was the first of its kind for all the organisations involved.

Surveying the location proved to be incredibly difficult and heavily time consuming. The team took two trips to the location in question and took over a hundred reference photographs! To ensure that the area was correctly scaled, the team used a mixture of reference photos, google satellite imaging and rough measurements from the site. Over the course of a week the team put together a viable construction scale and planned out the area build in Minecraft. With our building pallets ready and our construction preparations completed, it was time to start building.

Organised construction began in the evenings after the STEM Ambassadors had finished their university studies. Each project member was given specific parts of the world as a responsibility and I had the extra responsibility of stitching together the parts to create a seamless world. The next three weeks would see each builder complete their sections and I included extra detailing around the world. To give guidance and prompts to the competition participants, we also created building guides around the perimeter of the world that could help generate ideas.
Overall, the project proceeded relatively smoothly. No major problems were encountered, however we did have a small connection issue that we attributed to Cardiff University’s network safety settings. We managed to work around this by sending copies of the world once it had been updated as a form of primitive version control. After a little over a month, we had gone from nothing to having a fully built competition world with an almost 1:1 scale of the real location!

From there, the project was no longer in our hands. The project was launched via social media and schools, and the world was now under the creative guise of the competitors. After a few weeks of hard work, students began submitting their worlds to show us their amazing ideas.

The worlds were judged based on their technical building, innovative ideas and creativity. The judging team consisted of representatives from Cardiff Council and Child Friendly City, another Technocamps representative and myself. We had the difficult task of selecting a few worlds that became shortlisted and then deciding on the winners from that list. We considered the weightings of each criteria when judging and selected 5 individual winners and 4 team winners from the near 50 total entries.

It was a tremendously rewarding competition to be a part of and it taught myself and the organisation very important lessons on how to proceed with similar projects. The success of the competition lead to Technocamps being approached by other organisations who are interested in educational Minecraft and its applications. The response from the crafting challenge was overwhelmingly positive and it’s no surprise that the trend is starting to catch.

Overall, I really enjoyed working on the project as it gave me some very good experiences. I was able to attend professional meetings with Cardiff Council and act as a technical advisor for ideas surrounding the project. The project gave me experience managing multiple project developers whilst also producing promotional videos and extra documents. All of these different events and experiences definitely helped with my professional development, and I am very grateful to Technocamps that I was given the prosperous opportunity.