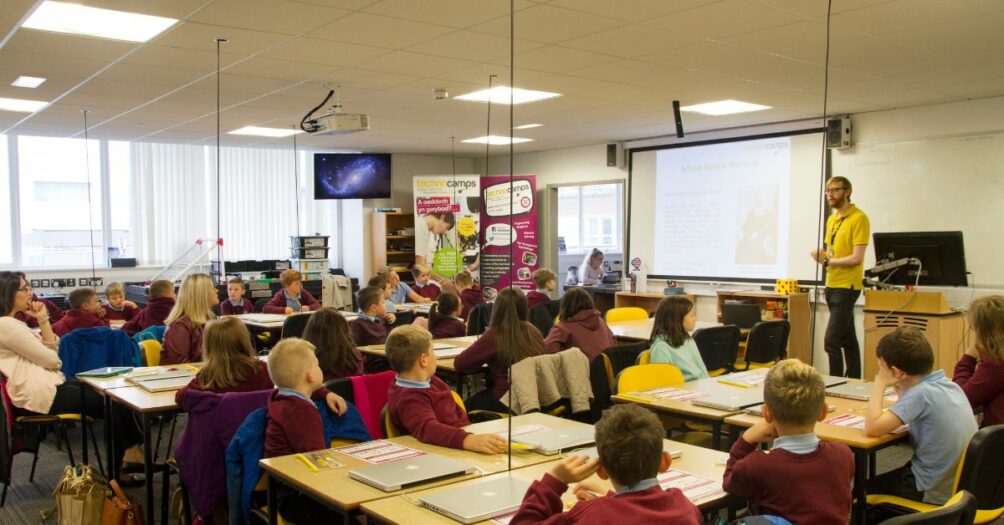 Our Operations Manager, Luke Clement, has recently completed our Degree Apprenticeship programme at Swansea University. Here, we look at how it has helped him improve his knowledge of computing and progress his career.

Luke has been working for Technocamps for 5 years, initially as a Delivery Officer and now as the Operations Manager based at our main hub in Swansea. He was always interested in computers and technology when he was younger, but the only course available to him at school was ICT. This didn’t appeal to Luke but he saw it as an opportunity to use a computer in lessons, which still felt a novelty at the time, so he chose to study it. He had always been interested in video games and at one point has envisioned himself as either a teacher or a games developer, which are both roles he does to an extent at Technocamps today. With a year’s experience as a Science teacher under his belt, Luke heard about a vacancy at Technocamps at Swansea University which seemed a perfect fit and he began to teach himself how to program. After securing the role, Luke immediately fell in love with the creative nature of programming when trying to find solutions to a given problem. It is safe to say, had it been offered at school, Luke would have jumped at the chance to study Computer Science.

As soon as he joined the team at Technocamps, Luke was thrown into the deep end. With a month to get to grips with programming concepts and how to implement them in Python before facilitating an 18-day accredited Computing for Teachers course throughout his first year in the role, it was somewhat of a baptism of fire. It was a great way to learn how to teach the concepts and develop his understanding and how to communicate it to the learners on the course. Luke was also developing and delivering computer science workshops for both primary and secondary pupils which is how he first came across the Scratch programming language which he became very interested in. Since then, Luke has made hundreds of programs and games, either as examples and tutorials, or as teaching tools to help teach more abstract concepts, as well as games for friends to enjoy. After being in the role for 3 years and feeling very comfortable, Luke decided to enrol on the Degree Apprenticeship programme to further improve his understanding of more advanced topics in Computer Science and improve his teaching of the subject.

Luke’s favourite aspect of the course were the programming modules, as well as the more theoretical and maths-inclined modules. Given his background in Theoretical Physics, he enjoyed being able to apply similar mathematical skills and logical thinking to a new subject that he had a lot of interest in. A lot of the work-based portfolio tasks on the DA offered a chance to put the theoretical aspects into a familiar context by allowing him to apply the learning to aspects of his role at Technocamps. The final year project was his favourite aspect of it as he was able to produce a mobile game involving Cybersecurity topics that will be useful for Technocamps delivery in future, as well as potentially future Degree Apprenticeship students. Luke noted that the best part was that the entire course was completely free and the level of support from the staff was higher than he has ever experienced on degree courses in the past. Our teaching staff are also open to feedback and question raised from students to ensure the course is a two-way learning experience.

There were challenges to the course, however, including self-motivation, balancing the course with a full-time job and a global pandemic. Beyond this, Luke also manages a band and performs in a choir in his spare time so his organisational skills are now unparalleled!

Having previously worked as a secondary school Science teacher, Luke naturally noted a lot of admin and stress in the role. He finds his role at Technocamps more fun and free with an opportunity to develop activities alongside passionate colleagues, so Luke would like to stay at Technocamps for as long as he can and implement all that he has learnt in his role.

“I feel like I’ve found a role and a workplace which suits my rather eclectic set of skills and experience and that I really enjoy doing. Having said that, the experience I have gained in management and teaching, along with the new qualification in Applied Software Engineering opens up more avenues that I can look to if I ever felt like a change of scenery, though I don’t see that happening any time soon!“